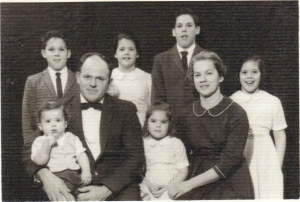 I went to my sister Rhoda’s house yesterday to visit with my cousins, Dot and Dorcas.  Their father had recently passed away and our family had gone to his funeral. As we sat and talked that day, the memories of our childhood came flooding back.

Their father was my mom’s brother from Lansdale, but in the 1950s, he had taken his young family west to farm where the open space was more plentiful and the possibilities seemed endless. That frontier spirit and hard work ethic was intriguing to us. In our family there was always excitement around the phrase, “Let’s go visit Junie’s (short for Albert Junior).”  We picked up on our parent’s admiration of this family that had left the comforts of immediate family to make a go of it in an area rich with fertile soil and potential.  It was the closest our family came to Laura Ingalls Wilder and we relished it.

Maybe it was the trip, the excitement of getting away for a day, or perhaps it was the tone of voice my dad used when he looked at Junie and Kathryn’s massive farm and the latest milking equipment.  Mom loved seeing her brother again, sharing the familiar glimpses of their former home life on Snyder Road, a farm life that provided for all of their needs even during the Great Depression and where they walked a mile to school each morning.  Going to see Junie was like going back in time for her and glimpsing a former way of life, filled with early morning milkings and late night egg sorting, but also of berry picking in the woods and the best tasting canned pork chops.

So, we went to Junie’s for the day and Uncle Junie and Aunt Kathryn were always gracious hosts.  We first got a tour of the barn and the milking operation and then the new machinery.  I sometimes went along on the tour to catch a glimpse of the reason why my dad had that impressed tone in his voice. My dad encouraged us to see everything, “Come along, Beverly, you want to see this!” When I tired of this tour, I went in the house to find the cousin that was closest to my age, Dottie Lou.  We usually got out the Barbies and I loved seeing all of her latest Barbie clothes.  I could hear from the other room, my sister Linda laughing with another Heebner cousin, Debbie.  They usually started their time together with a laughing spell—that was their greeting for each other, contagious laughter and giggles. If my brothers were along, they stayed mainly outside among the barn with our cousins, Dean and David, admiring their life on the farm. Soon they came in for dinner and it was usually a big spread at a long table, full of scrumptious mashed potatoes, gravy, beef or chicken, fresh and cooked vegetables, jello salad, and whoopee pies for dessert.

It was in all of us that when things got rough, we escaped to the wholesome life of Danville where we felt rejuvenated by the open space and cleaner air.  Apparently, my brother, Steve, even thought he could ride his tricycle up to Junie’s one day when things got tough.  We lived on County Line Road in Souderton at the time, so a trip to Danville would have taken quite awhile, especially by tricycle. My mom tried to discourage the trip by telling him, he “may not make it.” But Steve replied with a confident, “Oh, I’ll pedal real fast!” I don’t think he got much farther than the end of the driveway, but he certainly wanted to glimpse the comfort of the farm life on that day. Many thanks to the Heebner family in Danville for leaving us with such a rich farm heritage.                                  -BBM

3 thoughts on “For my Heebner cousins”