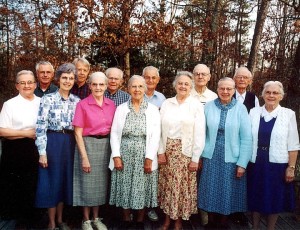 I’ve always been fascinated with graveyards.  When I was young I spent a lot of my spare time in the Franconia Mennonite Church graveyard.  From the time I was 6, I lived on the nearby Halteman Road, so my neighbor Lori and I would often ride bike to “the church,” drink from the cold, satisfying water at the hand pump, and then go play in the back portion of the property.  We first sat in the enclosed basement entrance on the cement and played clapping games like “When Billy was one, he learned to suck his thumb” and then later we walked around the tombstones, looking at the old brown ones with illegible letters  and the newer ones with pictures of young children.

But recently, I realized at a gathering of my aunts and cousins that death is something to be honored while we’re still alive.  My cousins Mary and Lois began our time with an explanation of why we were gathered together –in honor of their mother and our aunt, Edna Styer.  It had begun as a belated birthday celebration, but as Edna made decisions about her health, it also had become a time to pay tribute to Edna’s life among us. As we ate soup and salads, my aunts, Dorothy, Irene, and Edna entertained us with stories of life at 240 Chestnut Street with Grammy and Grandpop Benner.  We discussed recipes and traditions but also past failures were mentioned and even the Rapture.  We sang songs that were Edna’s favorites.  While I listened to my aunts’ strong alto voices, I remembered Lois’ words about the funerals of Uncle Merrill, Uncle Marvin, and Aunt Kathryn that made her realize how nice it would be for the person to hear their tributes before they died.  So we took some time to tell Edna how much she had blessed our lives…

In the memories shared, we celebrated our lives together and our heritage as Benner women.  Lois even called us the “Sisterhood of the Benner women.” Of course we as cousins were sad at times to think we might lose some of the sisterhood charter members, our aunts, but we chose to dispel the fears with prayers and words of encouragement –a hope for the future. Graveyards will probably always hold their fascination, but I’ve been blessed with a new way to honor my predecessors. –BBM