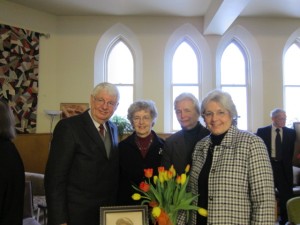 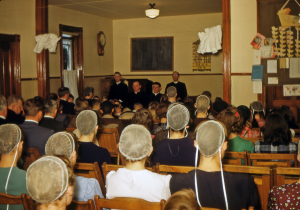 Discovering my Uncle Paul and His Calling
Written Summer of 2011

When I attended my cousin Stanley Benner’s funeral this past March in Kitchener, Ontario, I wondered why I never thought about it before that I had Canadian Benner relatives.  His death was a tragic reminder of all that I did not know.

Apparently, my dad’s brother, Paul, grew up in the Charles and Leanna Benner family, married Margaret Longacre from Vincent Mennonite Church and attended Souderton Mennonite Church after they were married in 1932. But Paul seemed to feel the call to missions at a young age and they soon joined the mission church at Finland. He had caught the fervor of the young men called to minister to the people along “the Ridge.” In 1948, Paul, Margaret and the family of 7 moved to Spring City and began attending Pottstown mission church.  This was the same year that their oldest son Ernest died of leukemia. Despite this tragic blow to their family unit, Paul and Margaret stayed focused on the church and their outreach in Pottstown.  Paul’s dedicated leadership was appreciated because two years after they began attending at Pottstown Mennonite, he was ordained as deacon of the church by Bishop Amos Kolb and Paul Lederach.  He was the only one receiving votes for nomination.  In 1951, he also was elected as trustee for the Sprogel Burying Ground which would eventually be the site of the new church building. So it came as quite a surprise to Elmer Kolb and leaders of the congregation when in May 1967, Paul announced that they would be moving to British Columbia.  In the Pottstown church records, a month later, it states that Paul Benner “did not feel bad about the congregation but things in the conference.”  The record also states a belief among church leaders that “materialism [was] killing our fervor.”

So, Uncle Paul and Aunt Margaret wanted to preserve some of the conservative values that they felt were disappearing in the Franconia Conference.  At the time, I was only 6 years old and totally oblivious that the Mennonite Church was changing or even that my uncle and aunt were moving to Canada.  I realized at some point that my uncle usually wore a plain suit and that my aunt wore a cape dress, but this was not that uncommon in those days.  As I got older, I knew that I should not be found in shorts or short skirts when “Paul’s” came to visit, but still did not realize the implications of all of this.  I remember my uncle Paul as a somewhat stern but gentle and patient man.  His quiet, unassuming voice was a stark contrast to my dad’s booming voice. But more importantly, my uncle was a devout Christian who chose to follow the path he felt God leading him and was a widely respected man of God.  That’s an amazing legacy to leave all of us in his family.  He didn’t hesitate to leave his siblings, parents and a more comfortable existence for the rugged life of the Northern Frontier to minister to a nearby Indian reservation.

His life lives on in his children who primarily live and work in Canada.  Thus, I have Canadian Benner cousins that share the same smile, the same sense of humor and some of the same interests, but I am only now getting to know them.